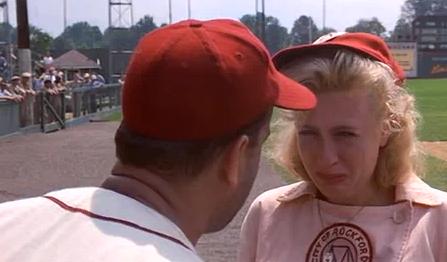 There’s No Crying in Screenwriting

Full disclosure: Sometimes my job calls for me to be a hard ass. Luckily for me, most of my writers do their work and plough on forward come hell or high water. But when that’s not the case, when the writer is getting “in their own way,” it becomes my job to step up and call them out on it despite the fact that I HATE being the bearer of bad news. Better me than the industry, right? At the end of the day it’s just part of the job.

A few weeks ago, I met with a screenwriter I’d been working with for well over a year. The screenwriter, who had some success a few years back, just completed a screenplay and sent it to a few producing contacts. But weeks had gone by, and all he was receiving was passes. “The script is well written but… “ “I wouldn’t know how to get this kind of movie done.” “Ultimately it’s just not for us.” Rightfully disappointed when we sat down, the writer lamented: “This industry is so haaaardddd!” “How come – of the 5 people I sent the screenplay to – no one fell in love with it and wanted to buy it?” “Why don’t they get me????” “How come it’s so haaaardddd?????”

Don’t get me wrong: this is not the first time I’ve heard this from a writer. But it’s also not the first time I heard it from THIS particular screenwriter. I know it’s hard. We all do. But for some reason, this particular meeting caused me to question whether this was a writer I should continue to work with moving forward. Now, for someone who dedicates her time exclusively to working with and supporting writers, this is an unusual – and somewhat jarring – reaction. After all, I’ve heard the complaints. I’ve been through the meltdowns. I’ve talked writers off the proverbial screenwriting ledge more than once. So I had to stop and consider: Why this writer? Why this moment? Why had I – who had heard it all and generally had no problem stomaching it – been so turned off?

And then I realized: Over the time we worked together, the writer had been doing more and more crying about screenwriting and the industry and less and less actual, well, writing. I was hearing a lot more about how much he hated the industry, and a lot less about his writing and determination to get his work out there. And his strategic efforts had been minimal at best. He took notes like they were a personal affront and refused to step outside of his comfort zone to expose his work. Instead, he took to sending his script to a handful of producers he had known and worked with in the past, and complaining about the changing nature of the business, all the while bitching about the communication failures of executives, and venting about what he had become: a misunderstood writer who wasn’t getting the reception he was so convinced he deserved. And the longer I knew him, the more dominant the complaints became. My problem was not that this particular writer was having a hard time. Every writer has a hard time. It’s essentially part of the job description. But it’s not – and never should be – the main part of the job description. So what made me reconsider our relationship was the realization that this particular writer was doing a lot more crying than writing. And in this industry, that’s just not the way to make your case.

I asked him to meet me for a “come to Jesus” conversation. There were some basic things that I had to remind him:

At the end of the day, my message to the writer was this: Sure, there will be tough moments. There will be disappointments. As I mentioned earlier, it comes with the job, and happens on every level, whether you are just emerging or are already a working professional. When going down a tough road, not every bump should have the ability to trip you up. You’ve got to pick and choose both your battles and your disappointments. After all, it’s far better to be a writer who embraces the challenges and, more often than not, focuses on enjoying the process. Because you know what they say… There is no finish line. There is only the journey.