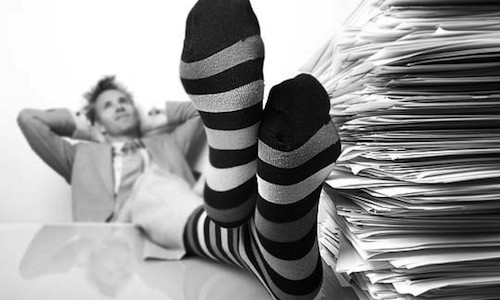 A few weeks ago, I met with one of my writers for a pre-scheduled meeting. Last I had seen him, he was riding high from a number of successful general meetings, and we had made plans for him to start outlining a new project. To my dismay, in our follow-up meeting, I discovered that said writer had done absolutely zero work on moving his new screenplay forward. Before I go further, let me tell you this: The people who work with me know that I am a stickler: A stickler for deadlines. A stickler for milestones. A sticker for moving things forward. When deadlines are missed without reason, when milestones are ignored, and when things are at a standstill, I get ANNOYED. So, eager to get to the bottom of this unexpected stalemate, I asked my writer:

“How come you haven’t worked on this like we planned?”

“Waiting on my manager to tell me what he wants me to work on.”

“And… I sent him a couple of emails.”

“Nothing. He didn’t respond.”

“He didn’t say anything?”

“Well… He said he was getting my last script out but didn’t really say anything about what I should work on.”

To give credit to the writer, he did the right thing: He engaged his representation in the conversation about his next project, allowing his rep to provide input that could be instrumental for moving his career forward. But the manager did not respond to the question at hand, even though it was asked a number of times. For all intents and purposes, the manager told the writer to leave him alone while he was doing his manager-driven job.

Securing representation often allows writers to think that this is the right time to stop, to wait, to see what opportunities unfold. Suddenly, writers who have had all the necessary conviction in their work,  storytelling abilities and unique voice seek approval for every step, every idea and every concept from the person now charged with helping to move their career forward, and become nearly debilitated without it. While some managers and even a few agents will seek to be involved in their clients’ every move, from deciding on their next project to working on their pitch, others trust that their writers will do their job while they pursue business and creative opportunities for both the writer and the project at hand. And the writer’s job is a straight-forward one. It is, quite simply, to write.

An industry friend, who used to manage writers and now teaches at New York Film Academy, recently shared a pearl of wisdom with me: If you don’t actively write, you are a written. Someone who wrote before, but is no longer actively pursuing the craft, and instead waiting for something to manifest in order to pursue further work. A working manager whose company exploded into the industry with a meteoric rise in recent years went as far as to tell me: “I don’t need my writers to network. I don’t need my writers to take Generals (general meetings). My writers need to do their job: sit at home and write.”

Waiting on guidance from an agent or manager who may or may not contribute his two cents is not the only thing that makes a writer complacent. Often, I find writers sitting on their hands while they wait for results from a big contest, while a current script is out for reads, or after a certain screenplay has been listed with such a service as The Black List, in the hopes that career-changing results will be yielded. But what many writers forget is this: Once someone has read your script, once your screenplay has won a contest, industry insiders will want to know what else you’re doing. They will ask you “what else do you have?” not only to see what other projects you’ve generated, but also to confirm that you are not being complacent. If your agent or manager fails to sell your script or land you a writing assignment and you have nothing new to give them, whether it was created with their input or without it, they will move onto their next client; if you don’t have the next script to them, if you can’t consistently feed the beast, they will find someone else who will deliver.

So when deciding on your next project, and in lieu of getting input or guidance from an agent, manager, or development executive who wants to help guide your career, trust your story instincts. After all, they are what got you that agent or that manager, what brought an 8 score to your script on The Black List, what helped push your script past the quarter finals, past the semi finals, in a given high-profile industry contest. Sure, it would be great to receive guidance from an agent or manager who would tell you exactly what you should write in order to further your career, but in the current industry environment where most reps come complete with over-loaded rosters and a number of A-List clients they need to ALWAYS keep happy, this is not a likely reality. Instead, identify your trusty advisors and turn to them to help determine your next best project. Engage in a writer’s group in order to stay on track and deliver pages consistently. Or find a writing partner to hold you accountable, keep you from becoming complacent, and help move your career consistently forward.