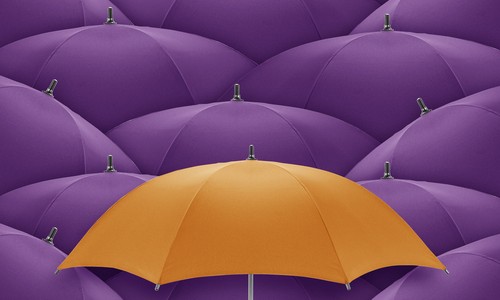 Making Your Mark: The Same-But-Different Conundrum

A few weeks ago, when debating which movie to go see at the local art house movie theater, I did what I often do to help come to a decision: I turned to reviews. One worthwhile reviewer, who actually gave this festival-favorite indie flick a somewhat positive review, highlighted this question: While the picture is aptly executed, what does it add to the genre? What is it doing that hasn’t been done before? Is it taking us to new heights, or for the same old journey? Ultimately, how is it pushing this sort of material further, to a new, revealing, interesting place we hadn’t seen before?

The same-but-different conundrum is nothing new in today’s industry climate. In fact, it’s everywhere in the arts: The musicalThe Scottsboro Boys married heavy civil rights issues with a seemingly upbeat musical format. Warm Bodies merged zombies with romance. Even on TV, now furtile ground for many writers out there, much has been turned on its head: We explored the crime world through the eyes of the ultimate good guy turned mastermind in Breaking Bad, empathized with the turned prisoner in the spy-drama that is Homeland, and while watching a weekly crime-solving procedural, rooted for the serial killer in Dexter.

The reality is this: Industry executives are not going to go out on a limb if they don’t have to. They would much rather get involved with work that is similar enough to that which has previously brought them success, but unique enough to be noticed by critics and audiences and stand out from the pack.

Many writers argue that because of the quality of movies that come out of the studio system, which often seems to repeat what has been done in the past, the same-but-different conundrum should not really apply to them. Despite the frustration it causes, remember this: Most screenplays purchased by studios come from writers who have already proven their worth. In the simplest terms, they don’t have to work as hard to get their material noticed out there. And while not everyone is a fan of such projects as Bad Teacher and Horrible Bosses, they do take a different perspective on what takes place in previously explored worlds such as the classroom or the workplace.

Because a screenplay requires serious buy-in in order to make its way to your nearest cineplex, it’s important that you know, beyond a shadow of a doubt, what’s unique about the work. Not sure? Here are a few questions to always keep in mind:

In order to be able to intelligently answer these questions, you have to read as many scripts, see as many movies as you can. Check out movie reviews regularly. If one movie is called a poor-man’s version of something else, ask yourself what is at the core of that comparison, and how this particular movie might have failed to move the genre forward be it from a narrative or emotional perspective. Only by knowing the material that came before yours can you masterfully bring something new to the established landscape. The industry is sitting on endless volts of completed material. In order to get their attention, your material has to masterfully deliver both comfort and excitement for the reading executive.